There are five sets of road closures we are currently aware of for central West Norwood in 2021:

Royal Circus and surrounding streets between Broxholm Road and Canterbury Grove.
Between 18 January and at least June 2021 Thames Water will be digging up roads around Royal Circus and replacing approximately 1.7 miles of Victorian cast iron water mains. The roads to be affected are:
Broxholm Road, Cambrian Close, Canterbury Grove (part), Chartham Grove, Egremont Road, Glennie Road, Ivymount Road, Lansdowne Hill (part), Portal Close, Pyrmont Grove, Royal Circus, Waldeck Grove and York Hill (part). Thames Water are expected to keep local residents informed as the project progresses. Keep an eye out for road signs like the one below (Broxholm Road). It is hoped the 315 bus service will not be disrupted.

Ullswater Road
This road will be closed until at least 28 March to enable SGN to carry out major gas works.

Norwood Road
The main road through West Norwood is to be subject to further disruption as both electricity and gas infrastructure works are understood to be planned, but we have not been given any details on timings or expected disruption. It is thought these works will take considerably less time than the Thames Water works which over-ran extensively and did not complete all the planned works (May 2019 - July 2020). We hope local businesses will be consulted on the proposals via Station to Station, and that the much delayed road resurfacing works (Robson Road to the South Circular) can then be undertaken speedily in 2021. 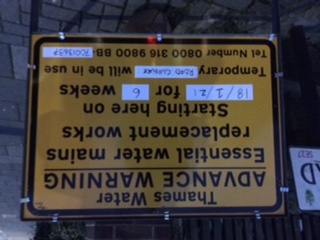